Like moths to the flame, that red MAGA hat may just be the flame that will destroy the myth of tolerance that Democrats wrap themselves in.

We all know how Nick Sandmann was vilified for smiling while wearing a Make America Great Again cap. He’s now suing CNN and the Washington Post for millions of dollars.

The latest example won’t result in a lawsuit probably, but it even more clearly exposes the dirty little secret of Democrats — their absolute fear of diversity of thought.

As reported by Breitbart.com:

“A black immigrant from West Africa was beaten up Saturday by two black men in Germantown, Maryland, because the victim was wearing a red Donald Trump ‘Make America Great Again’ hat, police say. The victim, Atsu Nable, is a legal immigrant from Togo and he supports President Donald Trump. But the two alleged attackers were apparently incensed by the victim’s Trump hat.”

This is typical left-wing behavior. Progressive Democrats frequently prevent conservatives from speaking on college campuses, and they just as frequently throw punches at people who support President Trump. Sad.

The two suspects — Jovan Crawford, 27, and Scott Roberson, 25 — have been charged with robbery and assault and face as much as 10 years in prison if convicted. Of course, it is more likely they will get off with a slap on the wrist because — after all — they were triggered by that flaming red hat. Democrats can’t help themselves, anymore than moths flying into a flame.

The victim, Atsu Nable, told a local TV station that he hopes the Democrats can “become more tolerant of opposing viewpoints.”

We all hope that, but it seems unlikely to happen as long as Democrats are led by the likes of Nancy Pelosi, Alexandria Ocasio-Cortez and Ilhan Omar.

In the meantime, more and more blacks and legal immigrants like Atsu Nable are supporting President Trump. Thanks to black supporters like Candace Owens, Kanye West and Diamond and Silk, there is a place of refuge for black Americans who want to get away from the hypocrisy and intolerance that define Democratic ideology.

They are welcome in the Republican Party, with or without a red hat, as long as they love our country, our Constitution and our customs. 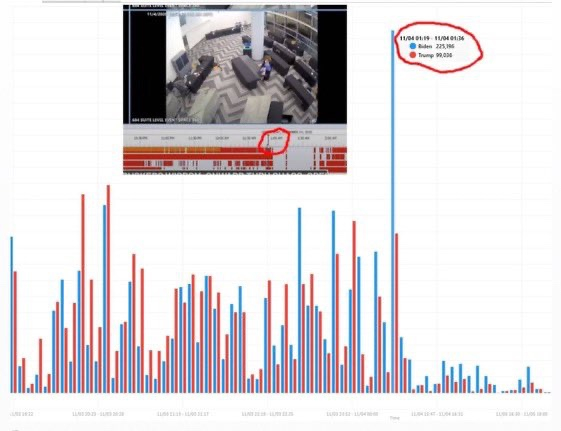 If you were looking for evidence that Joe Biden didn’t win the election, you don’t have to look any further. The “smoking gun” has been discovered. By now everyone has probably heard about the suitcases of ballots that were wheeled out from under a table in Atlanta and counted in ...