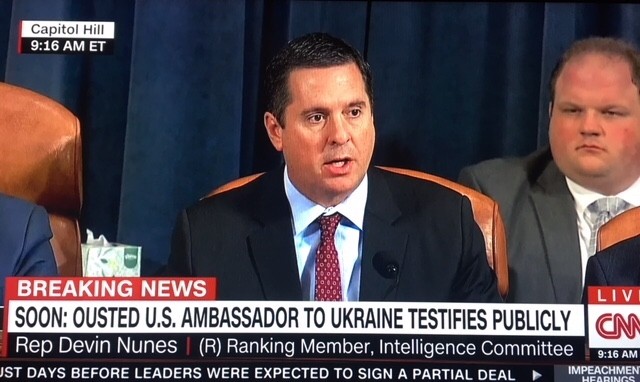 And so it begins. Day 2 of the Sham Impeachment Hearings. CNN introduces Ambassador Marie Yovanovitch by saying she was the victim of a “smear campaign.” They don’t notice the irony of how they are smearing Rudy Giuliani in the same sentence by suggesting that he was a crimnal making up “conspiracy theories” about Yovanovitch!

They also say that Yovanovitch was “expelled unceremoniously,” as if the president had to provide some elaborate explanation for her dismissal. John King and his associates at CNN simply don’t understand that all ambassadors serve at the pleasure of the president, and that they are expected to be loyal to the president and his foreign policy.

Chairman Adam Schiff’s opening continues the charade. Schiff admits that President Trump had the right to fire Yovanovitch, but says he is investigating “why” she was fired, as if there is some reason that the president is not allowed to use. There isn’t.

Hopefully, the Republicans will be [repared to fight back hard against this farce. Yovanovitch was gone in April, long before the phone call between Trump and Ukraine’s president that is supposedly the focus of this sham impeachment. She cannot know anything about the motivation of the president in making the call.

The early news in the hearing occurred when Rep. Devin Nunes, the top Republican, hurled bombs at the Democrats. He referenced Schiff’s collusion with the Russians to try to obtain nude photos of Trump, talked about the absurdity of Schiff’s claim not to know the whistleblower, and then read the transcript of the first phone call between Trump and Ukraine President Zelensky. Like the second call that has already been released, the first call turned out to be “perfect,” as President Trump would say! A beautiful call!

It shook up Schiff, who showed the ass he is by refusing to follow parliamentary procedure and allow Republicans to state their points of order.