HeartlandDiaryUSA.com Politics – Down and Dirty,The Media Mess Real Fears About Fake News: A Warning From Goldwater

Real Fears About Fake News: A Warning From Goldwater

Here’s my column from Real Clear Politics today.  I hope this warning from Barry Goldwater in 1974 about Fake News reaches a lot of ears in 2018. Thanks again to Roseann and David Quinn for providing the contents of the original Original Goldwater letter to me for my use in this column. — Frank

Real Fears About Fake News: A Warning from Goldwater

I recently received a reminder that the concept of fake news didn’t just spring fully formed out of the forehead of Donald Trump in 2015, but has been a real specter in American politics for decades.

Roseann Quinn, a reader from Kalispell, Mont., sent me a letter from the late Sen. Barry Goldwater, dated Sept. 19, 1974, that laid out a perfect case for its existence long ago.

It was written by the Arizona Republican to Orion T. Quinn, a World War II veteran who had used his piloting skills later in life to transport politicians such as Goldwater and Gov. Ronald Reagan to their political and campaign stops throughout California and elsewhere. Roseann’s husband, David, had inherited the letter from his father, who died in 1983, and Roseann came across it recently when rummaging through family mementos. It’s a reply to a letter from the elder Quinn, which from the context must have been a complaint about biased and unethical news reporting.

“Believe me,” Goldwater responded, “your concern about the press and media is shared by many of us in public life. I have been talking with editors around the country and particularly with the editor of the biggest paper here in Washington” – presumably Ben Bradlee at the Washington Post, fresh off the Watergate story – “pointing out that unless something is done to reinstill the American’s [sic] faith in the news media, they could well lose the freedom of the press.”

That is a significant admission by Goldwater — that he was worried an irresponsible press might somehow provoke such a backlash that it would eventually lose the protections afforded by the First Amendment. That is a worrisome prospect, one we have not yet reached even today, and it should be emphasized that Goldwater made the statement soon after Watergate, which arguably was the high-water mark of American journalism.

The next line is particularly interesting: “To really appreciate the abuse that news is receiving, you have to live in Washington where the news is made and you hear it made on the Floor of the Senate or the House or the remarks of the President and then read what is said about it the next day, and you wonder if you really heard what you thought you did or not.”

That phrase “the abuse that news is receiving” may sound at first like a complaint of Jim Acosta that he is being mistreated by scary Sarah Sanders, but it is far different. …

President Reagan meets with Senator Barry Goldwater in the oval office in 1984. 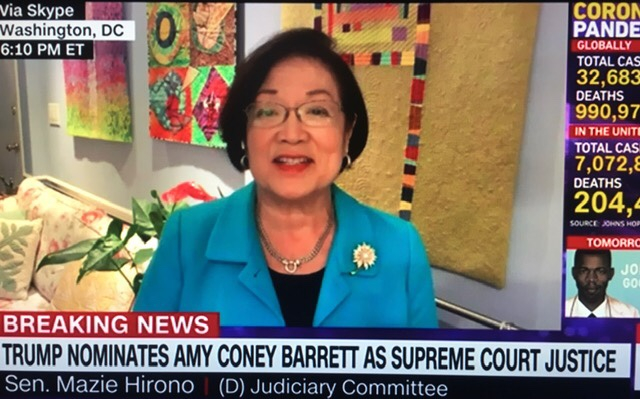 If you listen to the Democrats try to convince Americans not to support Amy Coney Barrett for the Supreme Court, one of their main arguments is that she will be the deciding vote to kill the Affordable Care Act (hereinafter Obamacare). Sen. Mazie Hirono of Hawaii just told CNN’s Wolf ...

Great news that Tucker Carlson’s show was the highest rated show on cable Tuesday night as he continued to fight back against the Outrage Mob trying to destroy his career. Carlson is probably the smartest guy on cable news — he is certainly the most astute and aware. He loves ...