Exposing the sick Antifa affiliation of the Dayton shooter

El Paso has been used to vilify Trump, and to suggest that The president is single-handedly responsible for all mass shootings in the country. That, of course, is why the Dayton massacre can’t be brought up. If he was inspired by anyone, it was Elizabeth Warren or Bernie Sanders.

It should go without saying that this idea of secondary guilt for shootings is idiotic. The idea that Trump is responsible for the shootings in El Paso makes no more sense than saying that Jodie Foster was responsible for the assassination attempt on President Reagan. Crazy people’s fixations and “inspirations” are their own crazy invention, and their individual guilt cannot flow over onto someone else whom they admired.

It should also be acknowledged that President Trump has condemned white supremacy and all other forms of hate. That includes the sick ranting of the El Paso shooter, who had married his ideas about race purity with equally extreme views about environmentalism and socialism. He posted a manifesto that highlighted his sick ideas and it is being carefully studied.

Nonetheless, if you want to learn from the shootings by studying the sick minds of the shooters, you need to do so fairly. That means looking at Dayton with the same concern as El Paso. So far, the very best study of the Dayton shooter has been penned by Andy Ngo, the Quillette editor who was himself the victim of left-wing violence in Portland when he was publicly assaulted by Antifa rioters.

Ngo’s op-ed in the New York Post is titled “Dayton shooter Connor Betts may be antifa’s first mass killer.” When you read it, you will see all the evidence laid out that the Dayton shooter was part of an organized violent left-wing movement that is dangerous and being promoted by the mainstream media.

Betts had long expressed support for antifa accounts, causes and individuals. That would be the loose network of militant leftist activists who physically attack anyone to the right of Mao in the name of “anti-fascism.” In particular, Betts promoted extreme hatred of American border enforcement.

“Kill every fascist,” the shooter declared in 2018 on twitter, echoing a rallying cry of antifa ideologues. Over the next year, his tweets became increasingly violent. “Nazis deserve death and nothing else,” he tweeted last October. Betts frequently flung the label “Nazi” at those with whom he disagreed online.

By December, he reached out on Twitter to the Socialist Rifle ­Association, an antifa gun group, to comment about bump stocks, and the SRA responded to him. (A bump stock is an attachment for semiautomatic rifles that allow them to fire much faster.)

In the months leading to his rampage, Betts expressed a longing for climactic confrontation. In ­response to an essay by Intercept writer Mehdi Hassan titled, “Yes, Let’s Defeat or Impeach Trump—but What If He Doesn’t Leave the White House?” the shooter wrote: “Arm, train, prepare.”

This is truly scary stuff. Anyone who has watched the masked thuggery of Antifa knows that they are the equivalent of the early Nazis trying to intimidate their opponents into silence.

Not sure whether President Trump can break through the Fake News Media smokescreen with the truth about the sickness and violence in America, but he is going to need all of us to help him do do. Tell people the truth about Dayton, and don’t be intimidated into silence, or we will all lose. 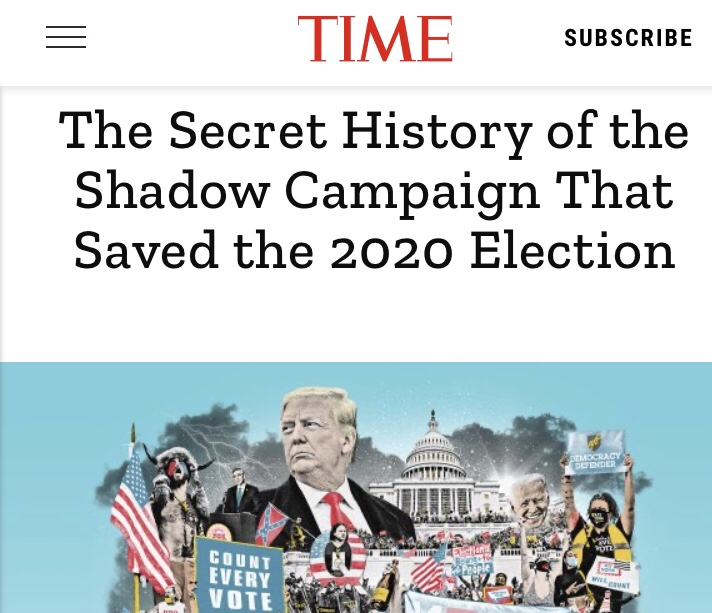 If you want confirmation of your sneaking suspicion that something wasn’t right about the 2020 election, all you need to do is read the new cover article in Time magazine. Titled “The Secret History of the Shadow Campaign That Saved the 2020 Election,” the story by Molly Ball exposes the ...