HeartlandDiaryUSA.com Deep State coup,Election 2020,MAGA,Politics – Down and Dirty,The Media Mess Joe, Barack and the unraveling of the Deep State Coup

Joe, Barack and the unraveling of the Deep State Coup 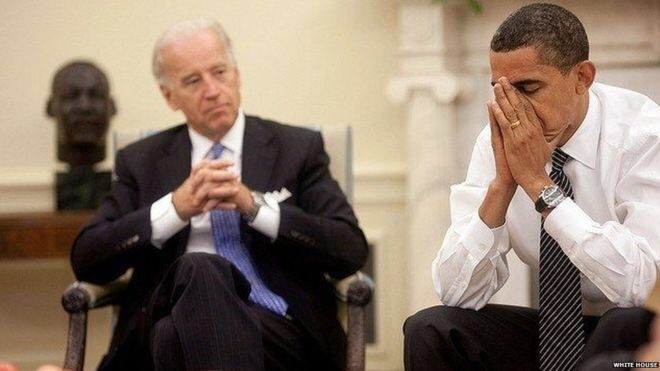 Those are supposedly the words of advice that President Obama gave to Joe Biden when he confided earlier this year that he was going to run for president.

We now know very well why Obama was worried about his former vice president running in 2020. There were too many bodies buried too shallowly to expect that none of them would surface if attention turned back to the Obama years.

President Trump has been sounding the alarm for years about the corruption in the Obama White House, but Democrats had succeeded in neutralizing Trump by painting him as a Russian agent (I know, it sounds absurd!) and now by threatening to impeach him.

Nonetheless, information has been accrued over the last three years that incriminates numerous Obama-era officials in a plot to deny Trump the presidency or, failing that, to undermine his effectiveness by planting false evidence against him.

Now, in a remarkable confluence of events, we are in the verge of what should be a tsunami of compelling evidence that the Obama administration and the Deep State conspired to overthrow the results of the 2016 election.

It was announced Thursday night that the Justice Department’s fact-finding investigation into the origins of the Russia Collusion Hoax has turned into a criminal investigation. That means US Attorney John Durham now has the power to subpoena testimony and documents to establish exactly who plotted against President Trump and who lied about what.

Former FBI Director James Comey, CIA Director John Brennan and National Security Adviser James Clapper are all under investigation, along with FBI agents Peter Strzok and Andrew McCabe, lawyer Lisa Page, Deputy Attorney General Rod Rosenstein and many more. The dam will not hold long now that people face jail time. Someone will turn on the others and then information will start to flow.

That news was broken by The New York Times, which tried to discredit the investigation in the same story where it was announced:

“The opening of a criminal investigation is likely to raise alarms that Mr. Trump is using the Justice Department to go after his perceived enemies.”

This continues the tactic of trying to dispel any incriminating evidence against Obama’s team as somehow invalid because it was accrued by Trump, who has a vendetta against the people who tried to destroy him.

Huh? I guess Trump was just supposed to sit still in his Oval Office chair while Comey, Brennan and the rest were hurling knives at him from the shadows. Nah. Trump had the right and responsibility to get to the bottom of the corruption that preceded him.

Before we see the results of Durham’s probe, we are going to get the release of Inspector General Michael Horowitz’s report on FISA warrant abuses that led to wiretaps and surveillance on Trump campaign adviser Carter Page. From what we know, Comey and Rosenstein signed off in the warrants even though they knew the Steele Dossier used to justify them was unverified and had been compiled on behalf of Hillary Clinton, Trump’s political opponent. That report has been long delayed, but is now due by mid-November.

In the meantime, attorney Sidney Powell has been doing amazing work redeeming Trump’s first national security adviser, Michael Flynn, who was the first victim of the Deep State coup. Flynn was forced to resign as a result of FBI charges that he lied about conversations he had with a Russian diplomat prior to taking office.

Flynn pleaded guilty while under pressure by the Mueller Special Counsel Tactical Assault Team, but he has never been sentenced. His new attorney, Powell, has found stunning evidence of corruption by the FBI and others in the government to entrap Flynn as a means to discredit Trump. FBI Attorney Lisa Page apparently edited the initial FBI report on the interview with Flynn to make him look guilty. Powell has also found evidence leading to Clapper and others in the plot.

I suppose this may have all been put before the public whether or not Biden had decided to run for president, but what is interesting is how the Biden-Ukraine affair mirrors the prior fake Russian collusion narrative. The same media coverup. The same evidence of hypocrisy as the Democrats were doing exactly what they accuse Trump of. And we have learned that much of the Fake Russian narrative originated in the Ukraine.

Because President Trump asked President Zelensky of Ukraine to get to the bottom of corruption in the 2016 election, and separately to find out whether Vice President Biden had violated his oath of office by engaging in corrupt practices, there is now no place for the Democrats to hide. They can’t impeach Trump without exposing the entire corrupt Deep State infrastructure that Trump was fighting against.

The question we may be asking next month is how high did the corruption go? We know that counterintelligence work is done for the president, so it is fair to ask whether Brennan and Clapper were reporting to Obama. It is also fair to ask whether Obama knew about how Biden’s son Hunter was enriching himself by setting up sweetheart deals in countries where his father controlled US foreign policy.

If the answer to either of those questions is yes, we will know definitively why Obama told Joe, “You don’t have to do this… you really don’t.”

In any case, I’m betting that the American people will eventually turn on the Democrats and the Resistance Media when they see that they have been fooled from the start about what really happened.

1 thought on “Joe, Barack and the unraveling of the Deep State Coup”

Tucker Carlson’s show Monday night on Fox needs to be burned on a titanium disc and put in a time capsule. It was that good. Heck, it ought to be shot into space as evidence for far-away alien civilizations that no matter how stupid people appear to be if you ...

As many of you know, I was a sworn enemy of Fake News long before President Trump popularized the term. I have now collected nearly 100 of my best columns about deception and bias in the Mainstream Media in my new book, “The Media Matrix: What If Everything You Know ...