More fake news from Yahoo, the folks who gave you the Steele Dossier 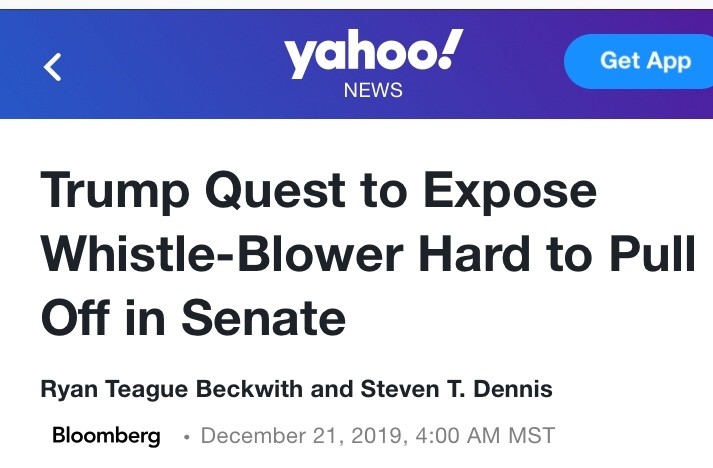 It was Yahoo News that first reported the fake story about Carter Page being a Russian asset from information planted in the fake dossier created by Christopher Steele to dirty up Donald Trump. Author Michael Isikoff later had to admit that he was used (by the FBI, and probably by the Clinton campaign?) to help set up Trump.

We now know that the Steele Dossier, which was paid for by Hillary Clinton and the Democrat Party, was a fictional account and possibly disinformation created by Russians to slime Trump.

You would think that Yahoo’s editors would try to hold themselves to a higher standard now, especially when reporting on Donald Trump. Instead, a new story by Bloomberg News was picked up by Yahoo that blatantly misstates a central fact regarding the impeachment of President Trump.

In an article entitled “Trump Quest to Expose Whistle-Blower Hard to Pull Off in Senate,” reporters Ryan Teague Beckwith and Steven T. Dennis claim that putting CIA whistleblower Eric Ciaramella on the stand would “pose legal and ethical challenges that would be hard to overcome.”

Um, no, it wouldn’t. First of all, as my use of the whistleblower’s name in the previous paragraph demonstrates, it is not necessary to “expose” the whistleblower. All that is necessary is getting the mainstream media to do their job and report the truth about Ciaramella, the former Obama-appointed White House expert on Ukraine.

Federal laws promise anonymity for workers who step forward with alleged wrongdoing. In this case, a government employee — reportedly a CIA analyst — challenged the propriety of Trump’s request to Ukraine’s new president to investigate Joe Biden and other Democrats.

A Senate demand that the whistle-blower testify would probably be challenged in court as a violation of the law’s protections, and as a move that could put the unidentified person at risk while extracting only secondhand evidence of limited value.

Federal law doesn’t promise anonymity for whistleblowers; it promises that your boss won’t be able to identify you publicly in order to protect you from retaliation. This promise does not apply to Congress, the President or the press, all of whom are free to identify the whistleblower just like I did.

As for putting the whistleblower at risk, that is his own responsibility. Technically he isn’t even a real whistleblower since he just forwarded second-hand information, most of which was inaccurate or distorted. But in any case he leveled an accusation against the president that resulted in impeachment; therefore the president has a Sixth Amendment right to face his accuser.

Let’s hope that Sen. McConnell keeps the pressure on. Trump has the high ground now and he needs to pursue the Democrat coup conspirators till they are jailed or disgraced or both.

As with most of you, I am huddled in front of my TV, on the edge of my seat, waiting for the fireworks to start. Prior to the Mueller Report being released, it appears the mainstream media has still not learned the lesson of what to do when you find ...

Fellow MAGA advocates: Don’t get discouraged! There is a reason why we supported Donald Trump in 2016, and that reason is just as valid today as ever — because we love our country and so does President Trump. You can’t fake it, though many have tried. If you need a ...