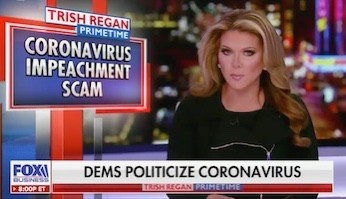 Coronavirus hasn’t changed everything. For instance, the radical left is still trying to silence the voices of conservatives in the media. In March, they claimed an important scalp when they convinced Fox Business to fire Trish Regan for telling the truth about how Democrats are playing politics with the virus crisis. Here’s my look at what got Regan fired, as published today at Real Clear Politics. Subscribe to my blog at www.HeartlandDiaryUSA.com for News Every Conservative Can Use.

The Strange Case of Trish Regan (Too Smart for TV?)

Monday, March 9, 2020, started as a day like any other for a newswoman in the midst of a global pandemic. Trish Regan, like other journalists across the country, studied the new data, both scientific and political, that had come to light over the weekend about coronavirus and developed the material she would use for the opening monologue on her prime-time Fox Business Network show.

As always, Regan was prepared to challenge the shibboleths and talking points of the mainstream media and the Washington establishment. While she had at times distanced herself from the more bellicose comments of Donald Trump, she nonetheless typically sided with him as a disrupter who was bringing much needed change to our federal government.

During the president’s impeachment hearings and trial, there was never any doubt that Regan considered that process a political sham that had hurt the nation. As an opinion journalist, she had earned the respect of her considerable audience for her hard-hitting commentary. As I had declared in analyzing a segment where Regan called law professor Pamela Karlan “the lowest of the low” for her attack on Barron Trump, “We cannot do without more and more of Trish Regan.”

Unfortunately, Fox Business and its parent organization, Fox Corp., did not agree. Although they tolerated her defense of the president during the Ukrainian impeachment hoax, they cowered when Regan challenged the conventional narrative of the coronavirus crisis.

“We’ve reached a tipping point,” she said on her March 9 show. “The chorus of hate being leveled at the president is nearing a crescendo as Democrats blame him and only him for a virus that originated halfway around the world. This is yet another attempt to impeach the president. …

“Many in the liberal media [are] using, and I mean using, coronavirus in an attempt to demonize and destroy the president.”

It didn’t take long for the liberal media to circle the wagons and start taking potshots at Regan. She was “truly bonkers,” according to the Daily Beast, which labeled her riff against the “coronavirus impeachment scam” as “batsh*t” crazy. By the end of the week, she was off the air, a victim of what the network at first called a need for schedule changes brought about by the virus itself. Then two weeks later, Fox Business admitted that it was firing Regan, but still could not bring itself to admit the reason.

“We will continue our reduced live primetime schedule for the foreseeable future in an effort to allocate staff resources to continuous breaking news coverage on the Coronavirus crisis,” the network’s statement declared.

Oddly enough, she wasn’t crazy until she defended President Trump from the liberal media and their Democratic Party allies over his handling of the coronavirus crisis. She backed up her assertions about the assault on Trump with clips that made the point for her: Rep. Jackie Speier saying the president isn’t “capable of telling us the truth about the coronavirus”; Joe Scarborough saying that “they have no plan”; Rahm Emanuel saying that the administration looks like “it couldn’t organize a one-car parade.” Most revealing was a snippet from MSNBC that “this is an event that could take down a president.”

Hmm … “take down a president.” That sure sounds like a desire for impeachment, but Regan wasn’t supposed to say so.

Note that Regan never said that coronavirus is a hoax (nor did the president, although both were accused of that). Nor did she say, as the Huffington Post claimed, that “the virus was a ‘scam’ created by President Donald Trump’s enemies to wreck the economy.” She was talking instead about the rhetorical efforts of the media and Democrats to neuter the president in a time of crisis by blaming him for things out of his control.

“This is impeachment all over again, and like the Mueller investigation, like Ukrainegate, they don’t care who they hurt,” is what she actually said, adding, “Whether it’s their need to create mass hysteria to encourage a market selloff … or to create mass hysteria to stop our economy dead in its tracks, they told us how much they crave a recession as a way to get rid of Donald Trump.”

Of course, not all Democrats have promoted the idea of a recession, but Regan backed up her claim with video of talk show host Bill Maher repeatedly wishing for a recession to “get rid of” Trump. “It’s worth it,” he told a guest. Regan didn’t fully understand the depth of the crisis we faced when she made her commentary on March 9, but none of us did. The gist of her critique of the bias shown in the media during this crisis hardly seems arguable though.

On March 29, “Meet the Press” host Chuck Todd asked former Vice President Joe Biden whether there is “blood on the president’s hands” as a result of what Todd characterized as a “slow response” to the virus. (This was too much even for Trump’s presumed November opponent. “I think that’s a little too harsh,” he told Todd. That’s right, the press is more partisan than the opposition political party.)

Meanwhile, that same day on CNN’s “State of the Union,” Nancy Pelosi let the cat out of the bag in her interview with host Jake Tapper. Like Todd, she blamed the president for American deaths from a virus that has spread worldwide from its starting place in China. But then she went further, drawing a rhetorical parallel to Watergate’s famous query: “What did the president know and when did he know it?”

So Trump is either the next Nixon or the new Nero, but either way, Pelosi just proved that Trish Regan was not only accurate, but prescient, when she warned on March 9 about the Democrats’ political gamesmanship.

After-action review? Isn’t that just the polite name for impeachment?

I remember the “after-action review” that Nancy and her minions Adam Schiff and Jerry Nadler engaged in within days of a phone call between Trump and the president of Ukraine being made public. Publicity hound Schiff has already threatened to create a “9/11-style commission” to try to pin the blame on Trump, and if the president gets reelected you can be sure that the commission’s files will be the basis for the impeachment that Regan predicted weeks ago.

Score one for Trish. Like I said, we need more and more of her on TV, and certainly less and less of Chuck Todd, Jake Tapper, and Jim Acosta. Too bad Fox Business cravenly caved to the complaints of the politically correct and factually incorrect left-wing mob. Hope she finds a new home soon.

If you turn on your TV this morning, you will probably see a headline similar to this one on MSNBC: “Delay fuels doubts about Iowa’s first-in-nation status.” Shop on Amazon for EVERYTHING TRUMP The Democratic Party badly bungled it’s caucus process in Iowa last night, so the first thing the ... 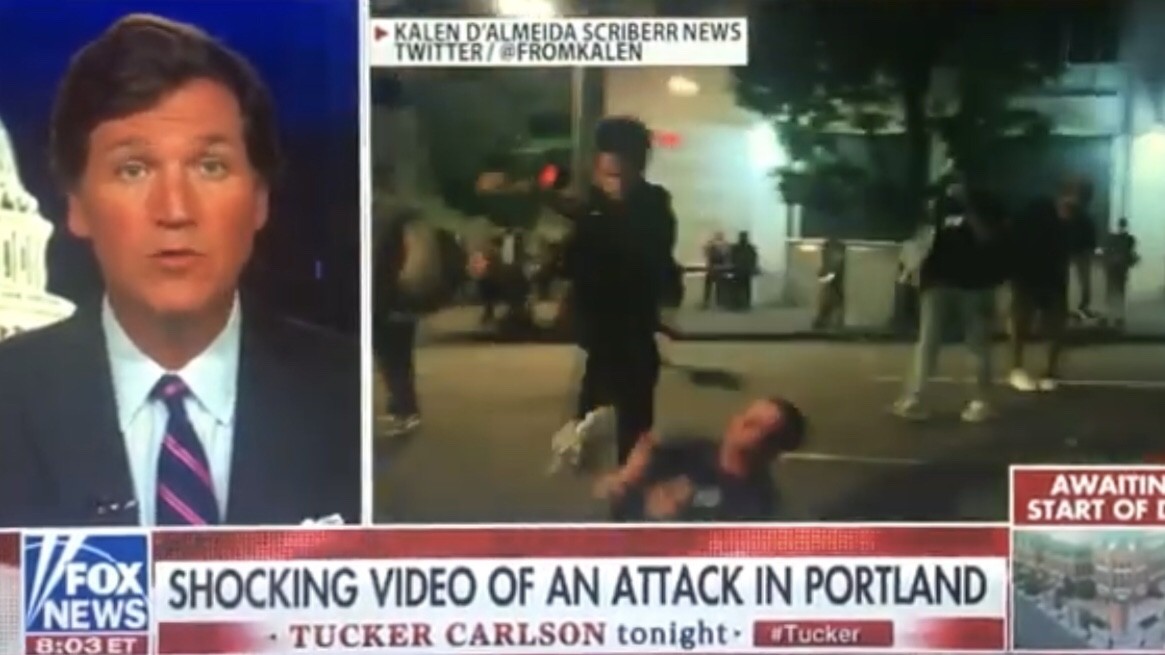 Tucker Carlson spoke for all Americans who love this country on Monday, August 17, when he condemned the violence in our cities and asked when the civil liberties of all Americans will be defended? Watch in despair as Carlson replays video of a man and woman being beaten in Portland ...