Even CNN had to admit Trump’s Mideast peace deal is historic (Meanwhile, MSNBC is still fantasizing about impeachment!) 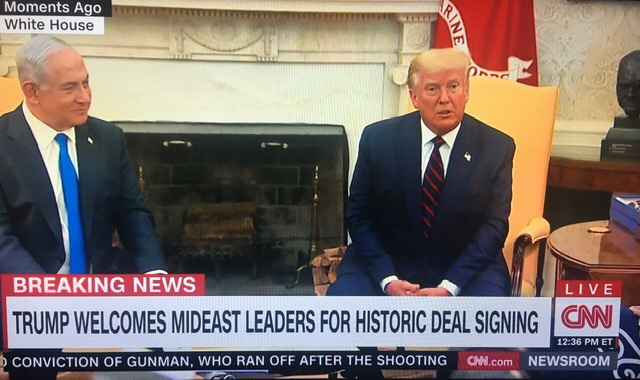 Haha. It was great watching CNN reporters and anchors squirm while covering Trump’s historic Mideast peace deal today at the White House, where Israeli Prime Minister Netanyahu joined the president and the foreign ministers of The United Arab Emirates and Bahrain in signing the historic treaty.

Not sure how the Nobel Prize Committee is going to be able to avoid giving Trump the Peace Prize now! If even CNN is ready to acknowledge that Trump has helped to solve one of the great global problems and brought peace forward as a real alternative, then how can anyone deny it?

As Netanyahu said in his prepared remarks, “This day is a pivot of history. It heralds a new dawn of peace.”

Of course, it should be noted that MSNBC is still trying to pretend that the peace deal never happened, or maybe is just a bad dream. While UAE Foreign Minister al-Nahyan was saying the deal could never have happened without President Trump, MSNBC was instead showing an interview with Lt. Col. Alexander Vindman, the treasonous pipsqueak who tried to get Trump impeached and removed from office over a phone call with the president of Ukraine! In other words, if Vindman and the dirty Democrats had their way earlier this year, then the Mideast peace deal would have never happened!

Watch the video of Trump’s meeting with Prime Minister Netanyahu and enjoy the moment where President Trump explains that his get-tough policies with The Palestinians and Iran helped make the deal possible. You’ll also hear Netanyahu debunk a Fake News question asking (incredibly!) if Israel is more isolated than ever!

Oh, and let’s give MSNBC credit where it’s due. Although they refused to cover Trump’s press conferences with Netanyahu and the UAE foreign minister, even they could not avoid covering the actual signing ceremony. Their banner headline? “Agreement could mean power shift in Mideast.” That’s as close as those communist idiots will ever get to admitting the President Donald J. Trump is a great president who is making a huge difference not just in the United States but in the entire world.

1 thought on “Even CNN had to admit Trump’s Mideast peace deal is historic (Meanwhile, MSNBC is still fantasizing about impeachment!)”

It was nearly three decades ago when Pat Buchanan stood athwart history and said “Stop” to the powerful political forces working to transform the United States into a nation ripped from its historical, religious and cultural moorings and set adrift on a sea of globalism. Sadly his long-shot candidacy for ...

The numbers in Montana’s Senate race have been quite confounding, but Matt Rosendale has taken small lead with 63 percent of vote counted. New York Times has up by about 4,000 votes but is still forecasting a Tester victory by 2.4 percent. I wouldn’t bet either way at this point. ...