HeartlandDiaryUSA.com Politics – Down and Dirty Gillette: The razor for people who don’t like men

Gillette: The razor for people who don’t like men

I wrote previously about the insane attack on men that Gillette launched with its bizarre “men suck” advertising campaign, but even I was shocked by the slap in the face to men of the company’s latest ad that celebrates transgenderism.

“Hey, men,” Gillette seems to be saying, “Even your daughters are better men than you are!”

The ad features Samson Brown, a transgender male, being taught how to shave by his real-life father. The tag line is, “Whenever, wherever, however it happens – your first shave is special.”

This isn’t marketing; it is social engineering. The number of transgender guys who will be buying razors is probably in the low thousands, but the number of real men (yeah, men who were born that way) eager to be shamed into letting their daughters shave is no doubt much lower, maybe in the single digits. Gillette’s goal is to make the world safe for left-wing ideology, not to sell razors.

Gillette should forget about trying to rescue the world from “toxic masculinity” and get to work finding a cure for “toxic wokeness.”

The story by German journalist Claas Relotius entitled “Where They Pray for Trump on Sundays” may be the most blatant example of Fake News yet. The response at Medium.com by one of the people erroneously represented in the Der Spiegel story lays out a damning indictment of the reporter for ... 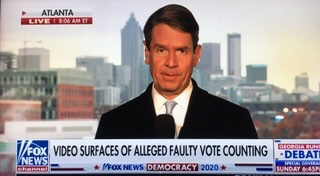