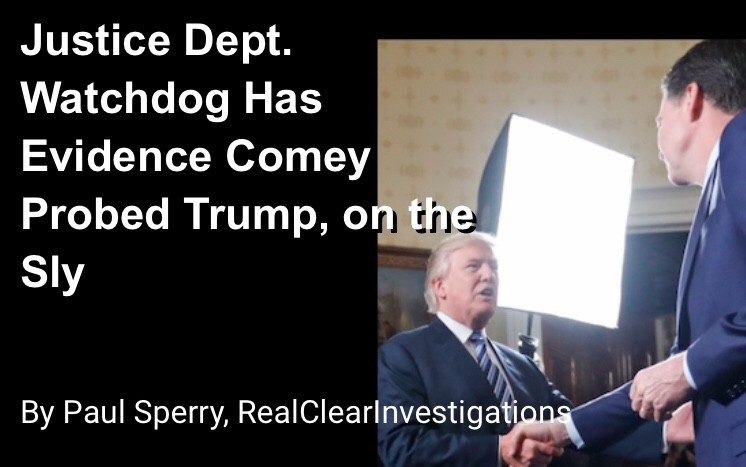 I found a story this morning at Real Clear Investigations that appeared to be the smoking gun that proved James Comey was at the center of conspiracy (coup?) against President Trump.

Because I had to go to my part-time job, I wasn’t able to write about Paul Sperry’s brilliant piece of reporting until now. In the meantime, Rush Limbaugh promoted Sperry’s article on his show, which proved I was on the right track! So here, better late than never, is my summary of Sperry’s article, “Justice Dept. Watchdog Has Evidence Comey Probed Trump, on the Sly.”

As you know, FBI Director Comey has told President Trump privately that he was not under investigation for collusion with Russia, but he would not say so publicly. Now we know why:

“Sources tell RealClearInvestigations that Justice Department Inspector General Michael Horowitz will soon file a report with evidence indicating that Comey was misleading the president. Even as he repeatedly assured Trump that he was not a target, the former director was secretly trying to build a conspiracy case against the president, while at times acting as an investigative agent.

“Two U.S. officials briefed on the inspector general’s investigation of possible FBI misconduct said Comey was essentially ‘running a covert operation against’ the president, starting with a private ‘defensive briefing’ he gave Trump just weeks before his inauguration. They said Horowitz has examined high-level FBI text messages and other communications indicating Comey was actually conducting a ‘counterintelligence assessment’ of Trump during that January 2017 meeting in New York.

According to Sperry, Horowitz’s report will be made public in early September. Let’s hope so, and let’s hope it includes criminal referrals for Comey and other conspirators. Comey has repeatedly denied, including under oath, that he was investigating Trump. Perjury charges should be coming.

There is also an intriguing report about the timing of Comey’s briefing of Trump that suggests we may know the identity of some of his co-conspirators:

Remember, the Comey briefing of Trump about the Steele dossier was the “justification” that BuzzFeed gave for reporting on the Steele Dossier smears about Trump and his campaign. What exactly was Comey plotting with Obama, Biden and the rest when they met the day before?

The other remarkable disclosure in Sperry’s reporting is that Comey had a real spy in the White House:

At the same time Comey was personally scrutinizing the president during meetings in the White House and phone conversations from the FBI, he had an agent inside the White House working on the Russia investigation, where he reported back to FBI headquarters about Trump and his aides, according to officials familiar with the matter. The agent, Anthony Ferrante, who specialized in cyber crime, left the White House around the same time Comey was fired and soon joined a security consulting firm, where he contracted with BuzzFeed to lead the news site’s efforts to verify the Steele dossier, in connection with a defamation lawsuit.

Not only that, but a second FBI agent who succeeded Ferrante also had suspicious ties to the Steele dossier and BuzzFeed.

Another FBI official, Jordan Rae Kelly, who worked closely with Mueller when he headed the bureau, replaced Ferrante upon his White House exit (though she signed security logs for him to continue entering the White House as a visitor while he was working for BuzzFeed). Kelly left the White House last year and joined Ferrante at FTI Consulting.

These are some of the highlights of Sperry’s reporting, but I encourage everyone to read the report for themselves. This is real journalism. Screw the New York Times. 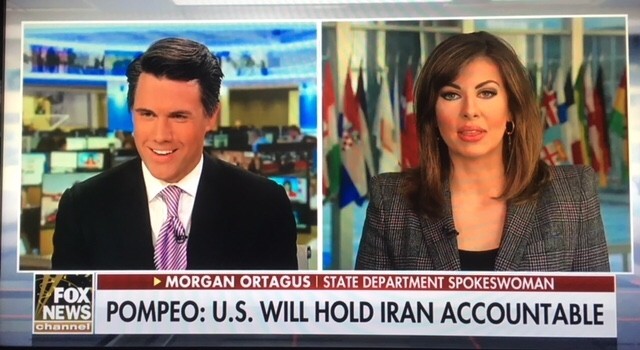 How long will it take for Fox News to admit that Leland Vittert is a loud-mouthed, snickering, sniveling know-it-all who embodies all the worst elements of Fake News inside his well-coiffed head? It would be a shame to see this once estimable news operation brought to its knees by one ... 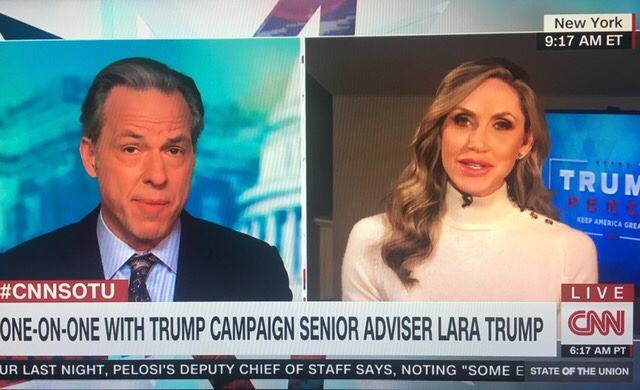 This has to be one of the low points in journalism of all time. In the Oct. 18, 2020, edition of CNN’s “State of the Union,” Smirky Jake Tapper ambushed President Trump’s daughter-in-law with a question posed in such a way as to make it look like she had “stutter ...